A roundtable was recently held in Vrlika with beekeepers from the Dinara area, who emphasized that the increasing climatic extremes have a strong negative impact on beekeeping. 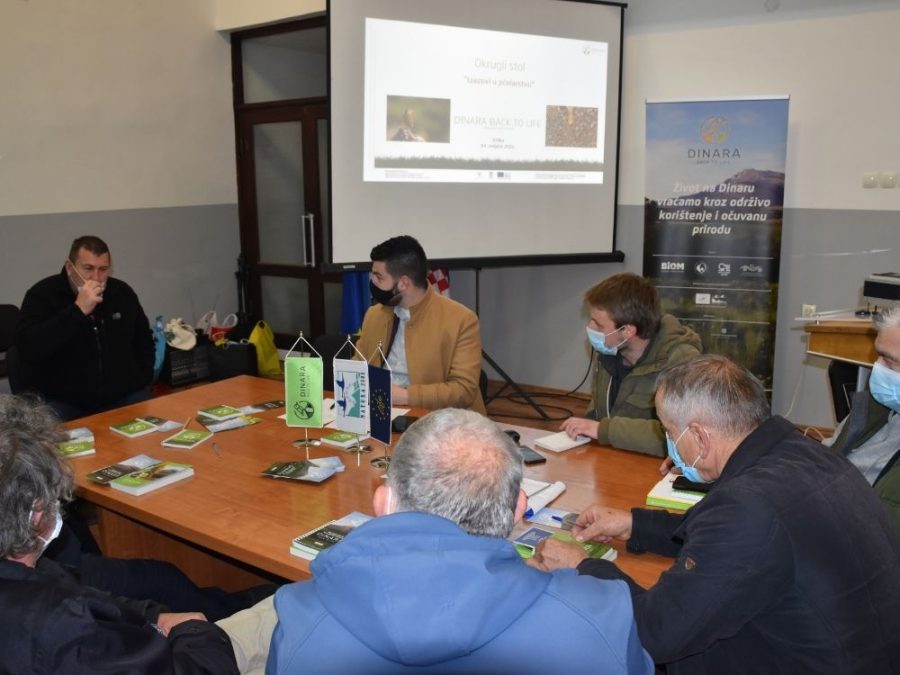 Climate change is the biggest obstacle to sustainable beekeeping – it is the conclusion reached at the round-table discussion “Challenges in beekeeping” held in Vrlika at the start of February. Specifically, disturbance in precipitation regime and more frequent droughts have a negative impact on vegetation, especially on wild honey plants; the absence of heavy rains in spring causes a delay in vegetation, making it difficult for honeybees to survive during increasingly dry summers; sporadic late-spring frosts have adverse effects on plants and yield. Beekeepers have also detected a new climate pattern – frequent occurrence of strong bura wind after rainfall which then very quickly dries out the soil.

The main activity of “Dinara back to LIFE” project is the restoration of Dinara grasslands due to their importance for nature and the biodiversity itself, which will benefit all the Dinara residents. Beekeepers, users of Dinara grasslands, are stakeholders in the project, which supports them with interconnecting and advocating solutions to their benefit. Round table discussions are also held to create space for dialogue and discussion, which can help bring out the issues, and ultimately enable beekeepers and decision-makers to create better conditions for beekeeping through stronger cooperation, and thus provide indirect environmental and economic benefits for this area.

Attendees of the second beekepers round table discussion in the project, held in Vrlika were beekeepers associations from the northern part of Dinara, BA „Dinara“ from Vrlika, BA „Vrisak“ from Kijevo and BA „Drača“ from Knin. The first round table discussion, held in Sinj in October, gathered representatives of beekeepers associations from the southern part of the project area, which includes the towns of Sinj and Trilj, and the municipalities of Otok and Hrvace.

Mirko Ljubičić, the president of the Split-Dalmatia county Beekeepers Association, mr. sc. Zora Kažimir on the behalf of the Public institution MORE I KRŠ, Ivica Mastelić on the behalf of the town of Sinj and Martin Ercegovac, Mayor of Kijevo, expressed support for beekeepers in Vrlika and Sinj with their participation in said events.

At the round table discussion in Vrlika, organized by the LAG „Cetinska Krajina“, which gathered around 20 beekeepers, it was emphasized that climate change in recent years has been making beekeeping in this area unprofitable, so more and more beekeepers are giving up, even those who have been doing it for years during which they obtained a lot of beehives. On the other hand, new beekeepers are starting to get involved in beekeeping. Seasonal pressure also occurs in this area – Dinara beekeepers claim that the recommended pressure is about 10 hives per square kilometer, yet during the season beekeepers start to come from other regions, so there can be up to 5000 hives in the region at that time.

Due to the lack of bee forage, beekeepers suggest planting trees and shrubs, such as winter savory, sage, lavender, rosemary, linden and chestnut, since they are the most suitable species for this area. Rosemary is particularly interesting as a plant that blooms twice a year. Given the climatic characteristics of this area, the most suitable trees are the ones resistant to high-temperature differences throughout the year. Beekeepers’ advice is to plant honey plants in public areas, which requires the consent of Croatian Forestry and Croatian Waters. Another proposition would be planting windbreaks consisting of honey trees, which had already been done last year in Sinjsko polje, where black alder, white willow and linden were planted.

Beekeepers are interested in purchasing a larger number of honey plant seedlings to plant next to their lots, an idea which received support from the mayor of Kijevo. Seedlings would be purchased through beekeepers associations for a lower purchase price. They also stated that other farmers disapprove if they try to plant honey plants on their initiative.

Maintaining the bees’ health is a key activity for hives preservation which is why it is required to treat hives twice a year, although a need for three treatments may occur as varroa becomes more resistant. Additional financial pressure regarding treatment comes from the regulation which states that the beekeeper must buy remedies in advance. The state later refunds the remedy purchase. However, it is sometimes difficult for retirees among beekeepers to set aside several thousand kunas at once for this purpose. A bigger problem even is the lack of sustainable incentive system. Incentives in agriculture are currently calculated per unit (e.g. hectare or head), with the exception of beekeeping. The state co-finances only the purchase of equipment for beekeepers, so they want to propose an idea of a system of incentives per hive.

Beekeepers proposed cooperation with Croatian Forestry in regards to cleaning, restoration and expansion of existing forest tracks. Due to their poor condition, some of them pose an obstacle to utilizing Dinara higher areas for bee forage, especially during the summer. It would be important to form road widenings, e.g. building stops for beekeepers to enable them to park or turn their transport vehicles. Forestries now have the opportunity to incorporate these ideas into their management plans.

One of the topics discussed at the round table was the communal treatment against mosquitoes carried out by local self-government units. Harmful effects to bees occur when the insecticide is sprayed using vehicles that pass through inhabited areas. The beekeepers believe that the solution could be in aerial spraying or direct treatment of the wet habitats, the source of mosquito-spread.

The aim of this, as well as the other round table discussions, is to analyze the current situation, combine interests and define steps for the implementation of the agreed agenda. As a result of the round table discussion held in Vrlika, guidelines will be determined for planting honey plants, both in public and private areas.

News published in February could encourage Dinara beekeepers to continue and perhaps even expand their businesses. Namely, Oilseed company from Osijek is offering honey plants’ seeds, as well as several indigenous plants that are hard to obtain. Given the difficulties in obtaining seeds of honey plants, with the exception of phacelia and buckwheat, beekeepers have the opportunity to easily obtain various types of plants such as white melilot, sainfoin, red clover, white mustard, camelina and others.

In addition, the Ministry of Agriculture will be implementing „School Honey Day from Croatian apiaries“ again this year with the goal to educate children and their parents about the importance of consuming honey, while promoting honey from Croatian apiaries. This improves market positioning for Croatian beekeepers, which also makes an additional opportunity for Dinara beekeepers.