Our project flock is growing – three new donkeys will improve grazing efforts, and we’ve had a new local cattle-herder join the project. 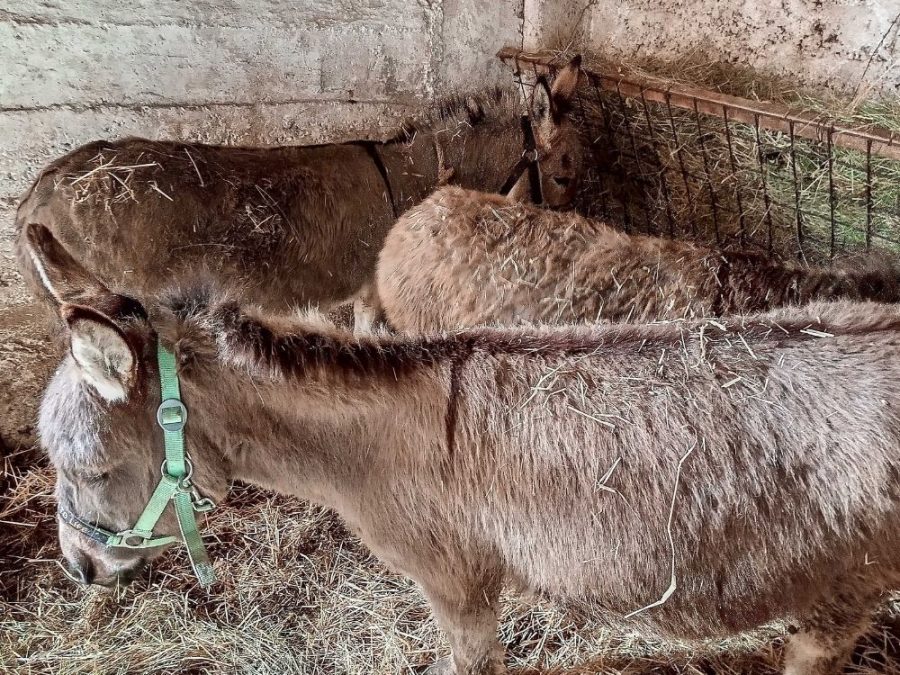 Our project flock has been increased by three new donkeys – Ivan Kaselj from Ježević acquired one female and two male donkeys, increasing his flock size to five. A sixth addition is expected in a few months!

The new males are two and nine years old, and the female is six and is currently pregnant with a foal – which will increase this flocks’ size to six this summer. Cattle-herder Kaselj’s plan is to eventually increase his flock size to 10 donkeys.

Kaselj takes his donkeys to Ježević dry field out to pasture, and new animals are taught the way by following a trail of corn from their stable to the pasture, with this training lasting several months. Afterwards, the donkeys can find their own way to the pasture and in the evening back to their stable.

Kaselj’s donkeys eat young juniper (Juniperus oxycedrus), as well as soft shoots of more mature juniper plants. In addition to his donkeys, this herder also has 40-ish goats which he keeps for dairy production, as well as two cows. His goats also graze on older parts of juniper plants, says Kaselj.

Thanks to this rich mixed flock the grassland at Ježević dry field will be improved as these animals graze on juniper bushes – the main cause of recession of fields on Dinara – but as the local flocks grow in both number and types of grazing animals, especially donkeys, the process of overgrowing by woody vegetation will be significantly slowed down. However, complete restoration and increase of grassland areas which are overgrown by bushes can only be achieved by controlled burning and manual removal of woody vegetation, which would then be followed by grazing. There, the donkeys would eat any new shoots thus preventing the woody plants from taking hold again.

Our project flock was formed in order to slow down and stop further overgrowing using targeted grazing and so far. So far, we have had 6 contracts with local cattle-herders signed. These herders have a lease on land within the project areas that also overlap with the habitats of stone-curlew (Burhinus oedicnemus) and short-toed Lark (Calandrella brachydactyla) – the bird species whose protection is the main goal behind this project. In order to reduce selective grazing, we encourage acquisition of animals with different grazing preferences as this allows us to target more intense grazing on woody plants, primarily juniper which is the main plant found in overgrown areas. As local herders mainly keep sheep, goats, or cows, we encouraged them to consider getting more hoofed animals such as donkeys to complete the flock and maximise grazing efficiency. With the support from the project the herders were able to add additional 22 horses and donkeys to their already existing flocks, thus raising the total project flock number to around 880 animals – 760 sheep, 90 goats, nine cows, and the aforementioned horses and donkeys. We’re hoping the herders will continue to keep mixed flocks even after the project finishes in summer 2023 and that the number of horses and donkeys will keep increasing due to natural growth. This will ensure grassland overgrowing will be slowed on a long-term scale. If we also manage to affect the practices and legal framework concerning manual woody vegetation removal combined with grazing, it could make a significant difference and shift on a local scale of the overgrowth trend we’re currently seeing, at least on the project area.

We’re developing our project flock in cooperation with local herders who own or lease the land in areas important as habitats for the project birds, these areas being Ježević dry field i Kijevo dry field.