Dry stone wall construction is an ancient method developed for practical and economic reasons, but it is also a sustainable building practice. Stone walls are made from natural locally-sourced material – stone, it can be deconstructed as easily as it can be rebuilt, and it enriches the local area visually. Useful, sustainable, and beautiful tradition. Therefore, we are happy to introduce the 4 Grada Dragodid association which has been focused on dry stone wall reconstruction for the past 15 years. 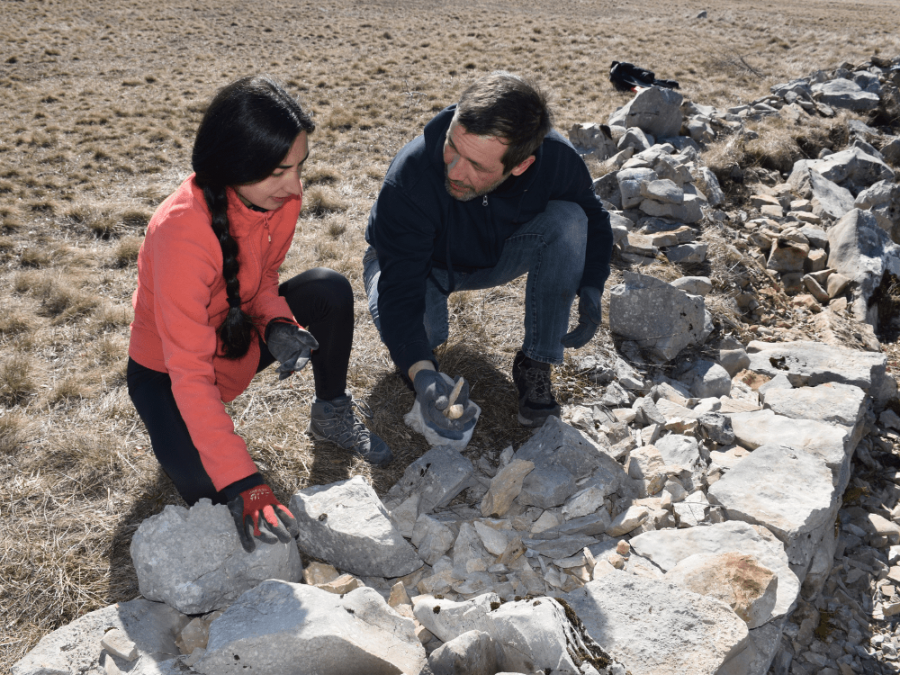 Studying and conservation of dry stone walls, organizing workshops, presentations, and educational activities, as well as popularising the method itself – these are the missions of 4 Grada Dragodid association which has been involved in this tradition for two decades, mostly in the coastal regions of Croatia. The collaboration between Dinara Back to LIFE and Dragodid began with our Collaborative Council meetings. It was followed by a lecture on stone wall building at the volunteer camp held for students. Restoration of Marunska bunarina, the first pond restored as a part of this project, followed last autumn, only to by continued this year with renovation of dry stone wall near the St. Jacob mountain hut on Vrdovo plateau. We have plans for future projects as well.

The association was named after a small stone wall village Dragodid on island Vis where the first workshops were held and where the old master builder of dry stone walls Andrija Suić lived. He passed on his knowledge to Dragodid, and was one of the people who gets the most credit regarding the revitalisation of this tradition because he gave guidance and suggestions on this method, as Zvonimir Malbaša, Dragodid member from Sinj, puts it. In the village of Dragodid they used to say, ‘‘even water has 4 grad’’ (“grad” is an old unit used to measure the alcohol percentage in a drin, which equates to approximately 10%), hence the name of the association.

The first informal workshop was held in 2002 while 4 grada Dragodid Association was officially founded in 2007 when they started to expand and take their work more seriously. Today Dragodid has 50 members from all over Croatia, including Slavonija region where stone is not a common material. Majority of their members are ethnologists and architects as well as experts from other fields such as art historians, computer engineers, pharmacists, stonemasons, and other tradespeople etc. The headquarters of the society is in Šapjane near Rijeka.

One of the bigger successes of the society is inscribing ‘Art of dry stone walling, knowledge and techniques’ into the UNESCO Representative List of the Intangible Cultural Heritage of Humanity in 2018. This was initiated Dragodid, alongside by stone wall builders from France, Greece, Italy, Slovenia, Spain, Cyprus, and Switzerland. Being inscribed into the UNESCO list is a confirmation of the importance of preserving this building method which is important to the people as well as nature of the Mediterranean. For its work Dragodid has also received the notable European award Europa Nostra, was recognised as a Project of Influence by Best in Heritage and was awarded at the Zagreb Salon of Architecture.

Every year Dragodid organises around 30 stone wall workshops with dozens of participants. These workshops are a great opportunity for those that are interested to get started with dry stone walls building, and especially useful are the multi-day workshops held at Petrebišća summer camp on Učka, where this year they will hold their 13th workshop in a row. Weekend workshops are held on islands, in Dalmatia, as well as Istria, and there one can learn the basics of dry stone wall building. From there everything else is a matter of practice – ‘’people get their hands on their inherited stone wall buildings, try to restore it and quickly they become very skilled in this method’’, encourages Malbaša any future stone wall builders. Malbaša points out the great feedback from their students, large workshop turnout, and overall satisfaction of volunteers – some of which have started their own restoration projects restoring walls therefore spreading the knowledge and increasing the overall number of restored stone walls. The society itself either organised or ran stone wall workshops on 20 islands, 10 protected areas, and 23 towns and municipalities within Croatia, while abroad they took part in stone wall restoration activities in Greece, France, Italy, Portugal, Montenegro, Romania, and Bosnia and Herzegovina.

Last year in Konavle near Dubrovnik, Dragodid organised the International Congress on dry stone, held at European level and was an important event for international dry stone wall building and restoring collaborations. These international collaborations are very important for exchanging knowledge on stone wall building due to the specificity of this method. In the spirit of this exchange Croatian builders also attend workshops abroad, while the workshop held at Petrebišća is attended by foreign volunteers. Considering these countries have different kinds of stone, they also use different building methods, for example, in France where slab-like stone is present – the wall layers are horizontal thus making the wall straight. In general, where there is stone in the world there are stone walls – from those found in South America in the likes of Machu Picchu to the pyramids in Egypt which are also considered type of dry stone wall buildings, Malbaša says imaginatively.

In Croatia, each region has its specific way of stone wall building, primarily due to the different types of stone present in Istria, Dalmatia, and more specifically in the Ravni Kotari region where platy limestone is found. Stone walls can also be found outside of Croatia’s coastal regions – in Zagorje they’re often used as retaining walls as their structure is perfect to restrain soil while letting it drain. Additionally, builders adjusted the size and type of stone according to appropriate building methods and wall uses, they knew the area and what to expect in it. For centuries this method was developed and perfected and there was no need to alter it, states Malbaša clarifying the association’s position on this topic.

In the 20 years of informal and 15 years of its formal existence Dragodid engaged with all types of constructions made with the dry stone wall technique, whether it was border-walls, houses, filed huts – ‘bunjas’, ponds, wells, and any other structure built in this technique. Naturally, in coastal Croatia stone is the primary building material and whenever something was built the main consideration was how to use what is available. The builders were also considering the economic implication of their work – when building walls and borders they were simultaneously clearing the land of stone thus creating agricultural land. In addition, fences made of dry stone provided protection from animals, wind, and snow, without having a negative impact on the local wildlife – wild animals could either squeeze through the wall or jump over it, and it can be used by various other species such as lizards, frogs, birds, hedgehogs, snakes, small rodents etc.

In order to further popularise this method, Dragodid made ‘Gradimo u kamenu’ handbook which gathers the knowledge on this method and presents the framework for building and preserving dry stone walls. This handbook is excellent help for beginners who are only getting started with stone walls. Those wanting to get their own copy can contact the publisher Slobodna Dalmacija, and two chapters are available as a PDF here (Croatian only):  http://www.dragodid.org/gradimo-u-kamenu-ponovno-na-kioscima/

Dragodid also took part in launching of Suhozid.hr website (available in English), open public inventory of Croatian dry stone heritage where everyone is welcome to add photos and locations of any walls, buildings, settlements, structures, ponds, wells, ancient paths and similar constructions, in short every instance of dry stone wall construction one encounters in Croatia.

Last year Dragodid also restored many ponds such as the one in Gaćelezi, on Zlarin, in Konavle, Vučipolje… We’re glad this collaboration had started and that stone wall building has been repopularised in these parts, Malbaša reflects on their work with us on Dinara. „We’re very happy and look forward to future work together“ – he concludes!