International experts in Sinj at the ‘European Green Deal – How Croatia Can Strike It?’ panel discussion

Next Monday in Sinj we are organizing an international panel discussion 'European Green Deal – How Croatia Can Strike It?'. Attend it or watch it online! 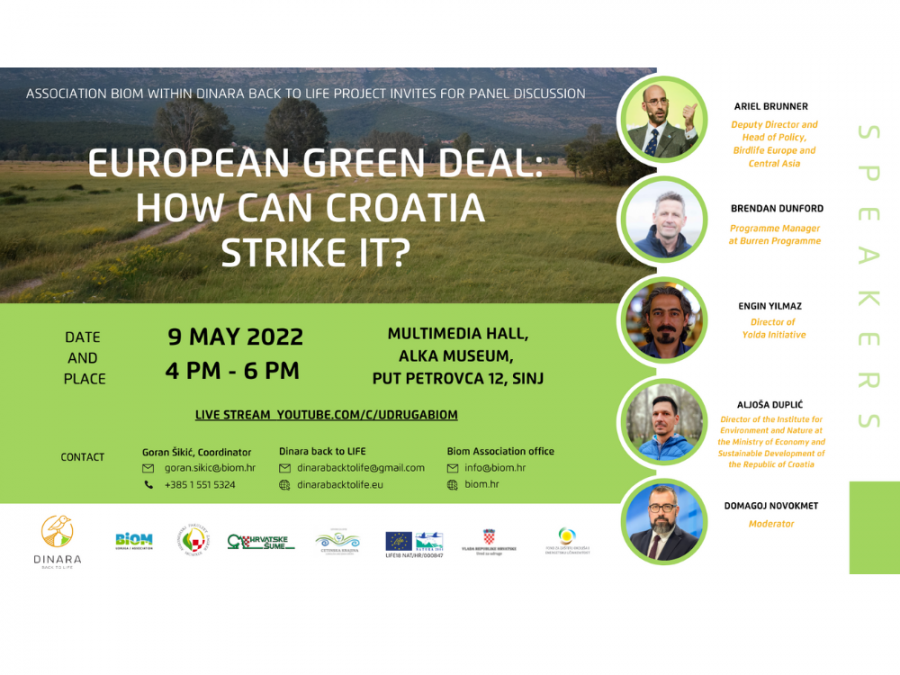 International and domestic experts Ariel Brunner from BirdLife International, the world’s biggest organization for protection of birds, Brendan Dunford from the Burren Programme, Engin Yilman from Yolda Initiative, and Aljoša Duplić from the Croatian Ministry of Economy and Sustainable Development will be the speakers at the ‘European Green Deal – How Croatia Can Strike It?’ panel discussion, organized by the Association Biom in Sinj on May 9 within the Dinara back to LIFE project.

European Green Deal is the start of a new era in European history and marks the strategy of growth that the EU countries will use to face climate and environmental challenges and to transform their economies and societies to make them sustainable. We can freely say that biodiversity has never been more important, however, the key lies in finding the balance between the need to protect nature and biodiversity on one side, and human activity and economy on the other. There’s an influx of nature protection challenges, and the current energy crisis puts additional pressure on balancing nature protection with the needs for economic development, as well as renewable energy sources.

„With this panel discussion, we aim to hear examples and experiences in nature conservation from the entire world and to comment on challenges and possibilities that are opening for Croatia in this period. It is an honor to host experts with such knowledge and experience on our panel. We invite all to take part live or via live stream“ – Željka Rajković, director of Association Biom noted.

European Green Deal responds to challenges set forth by climate change and habitat degradation, aiming to improve the quality of life for current and future generations. Thusly, it is important for citizens to take part and follow national policies. Only cooperation can guarantee the Green Deal to succeed and bring permanent change.

The themes of the panel will include the purpose of the Green Deal and its significance for specific sector policies such as energy and agriculture; experience of EU countries in Green Deal implementation; challenges and opportunities for Croatia; positive experience from the Mediterranean basin in harmonizing nature and human activity, and other current issues.

Speakers at the panel are international and domestic experts in nature conservation.

Ariel Brunner coordinates the work of BirdLife Europe on a wide range of EU policies ranging from nature and biodiversity conservation, to climate and energy, fisheries and agriculture. Over the last decade, he has been deeply involved in debates on reform of the Common Agriculture Policy and is widely recognized as a prominent expert on the environmental impacts of EU farm policies.

In recent years, he has played a leading role in advocacy around the European Green Deal, the EU Biodiversity Strategy, and the NatureAlert campaign to defend and improve the implementation of the EU nature protection legislation. He has been very active in debates over the sustainability of renewable energy and bioenergy in particular as a leading critic of EU support for biofuels. Currently, he is a board member of the Renewable Grid Initiative and a member of the EC Platform on Sustainable Finance.

Brendan Dunford has spent the past 20 years living and working in the Burren region in the west of Ireland, where he led the award-winning BurrenLIFE Project (2005-2010) and currently manages its successor, the ‘Burren Programme’ www.burrenprogramme.com. This innovative ‘results-based payment’ programme incentivizes farmers on over 23,000ha of priority limestone habitats to improve local biodiversity, water quality, and cultural heritage, delivering consistent social, economic, and environmental gains annually since its inception in 2010.

Dunford is the founder of the Burrenbeo Trust www.burrenbeo.com –a leading advocate for place-based learning and community stewardship in Ireland – and a founder of www.farmingfornature.ie which aims to acknowledge, celebrate and support farmers across Europe who work on nature protection. In 2011 he became an Ashoka Fellow and in 2018 he was awarded an Honorary Doctorate by the University of Galway for his work in championing farmland biodiversity.

Engin Yılmaz is the director of the Yolda Initiative which is a nature conservation organization based in Turkey and working at an international level. He is also the coordinator of the Alliance for Mediterranean Nature and Culture (AMNC) and the co-chair of Europe IYRP Support Group. He has a long career at civil society organizations, a major part of which he devoted himself to nature conservation. Founding Yolda Initiative in 2015, his research and conservation interest since then has been mainly focused on cultural practices, particularly mobile pastoralism, that benefit biodiversity. Engin gained valuable experience also as the director of the BirdLife partner in Turkey where he worked from 2010 to 2015.

Aljoša Duplić is a director of the Institute for Environment and Nature at the Ministry of Economy and Sustainable Development. He has PhD in Biological Sciences from the Faculty of Science at the University of Zagreb. Prior to being a director, he was head of the Sector for nature protection at the Institute for Environment and Nature. During 16 years of experience in the field of nature conservation, he worked on different topics from nature conservation, mostly connected with species conservation and sites. He actively participated in the preparation of the Proposal of the national ecological network and also the Croatian proposal of the Natura 2000 ecological network. He worked on development of framework for implementation of the management of Natura 2000 ecological network (sites) in Croatia through the Operational program for cohesion and competitiveness. Additionally, he worked on the development and implementation of the system for monitoring, rapid response, contro,l and eradication of the invasive alien species.

The panel discussion European Green Deal – How Croatia Can Strike It? is taking part on May 9, from 4 PM to 6 PM at the Multimedia Hall of the Alka Museum, at Put Petrovca 12 in Sinj. The language of the discussion is English. It will be moderated by journalist Domagoj Novokmet.

Panel discussion can be watched online, at the Biom YouTube channel –