Marunska bunarina was a neglected pond, after it has been restored last weekend, it is again a source of water and a support for biodiversity. 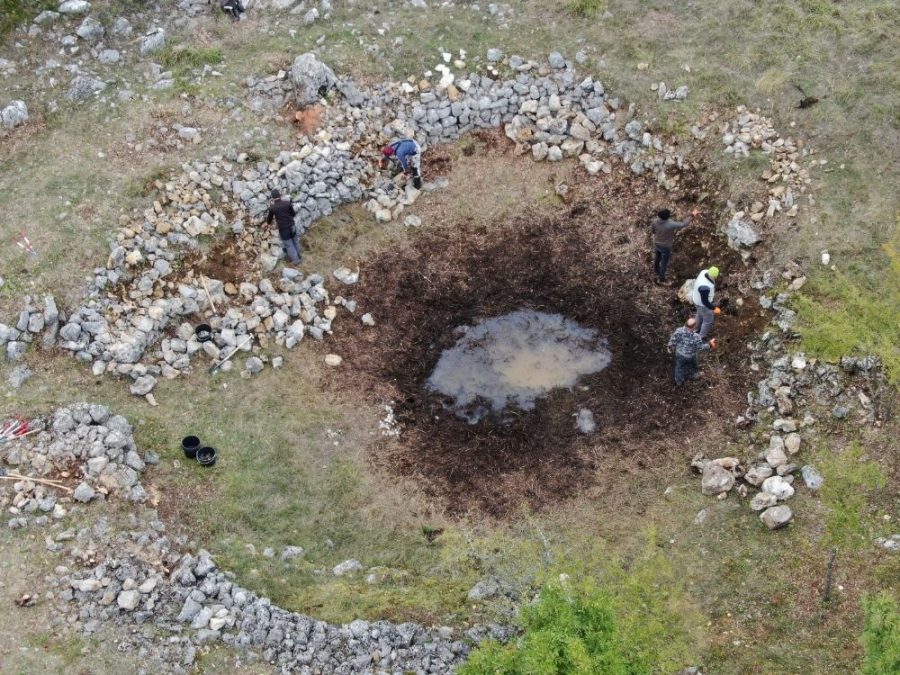 The proposal to renovate the Marunska bunarina pond came through the Dinara back to LIFE Collaborative Council, which brought together stakeholders such as hunters, ranchers and beekeepers, giving the community a chance to highlight what they think is important for restoration. This stakeholder proposal was implemented a few months after it was presented.

The process of rebuilding the pond began with the transfer of knowledge. Alen Čikada, an expert from the Association for the Protection and Restoration of Karst Puddles KAL, in the Palacina Hall in Sinj on Friday, October 8, gave a lecture “How and why do we restore ponds in karst?”. Čikada also presented successful examples of karst pond restoration. Restoration expert Čikada, from Lucijan near Žminj, has been dealing with ponds since childhood, and through the KAL association he has been working on ponds restoration for a decade. In his lecture, he passed on his knowledge about the restoration of the pond, and the participants of the lecture gained his knowledge and will be able to start applying it themselves.

On Saturday, October 9, the application of what was learned followed – about 20 people participated in the restoration of the Marunska bunarina pond, including hunters from the Hrvace Hunting Association, members of the Cetinska Krajina LAG, members of the Dragodid association that deals with drywall restoration, Alen Čikada from KAL and members and volunteers of Biom. Marunska bunarina pond near Vučipolje on the eastern side of Lake Peruća was overgrown by vegetation, with collapsed dry stone walls in which however the waterproof layer of dirt has been preserved, so the pond was functional, the water was still retained and was therefore suitable for restoration.

At Saturday’s action, the vegetation that grew from the pond itself was removed, and the vegetation that grew in the vicinity of the pond, which caused the dry stone wall to collapse and was preventing access to the pond, was also cleaned. The bottom of the pond has been cleared of grass and other vegetation to prevent sludge from forming. The dry stone wall that encloses the pond has been largely restored and will prevent the dirt from collapsing into the pond in the future, as well as the intrusion of other material. Cleaned and restored in this way, the pond should keep water for longer periods, and should also be a source of drinking water during the dry summer period. Photo traps will also be placed on the restored pond to monitor which wildlife is using it.

Ponds are one of the few examples of human intervention in nature that are good for nature and contribute to biodiversity. They were once used to hold water and maintain livestock where there was no water, and as there are fewer herders and livestock in this area, ponds are less and less used, so they are no longer maintained and are decaying.

Biom’s expert advisor for nature protection Ivan Budinski comments on the condition of the Marunska bunarina pond before and after the reconstruction, and assesses its impact on biodiversity in this microlocation: “The pond was in poor condition and it remains to be seen what it will support from living beings. This summer it has completely dried up so we don’t know what was in it and whether it died due to drying out or managed to complete a part of its water-related life cycle and will surely leave the puddle. The amphibians certainly did not survive because the pond dried up early and long after that there was no rain to keep the young amphibians, hidden in the soil around the pond, alive. We hope that the pond will be inhabited by amphibians typical of the area this autumn (salamander, brown toad, forest brown frog, large green frog) and that it will serve as a water resource for many wild animals and livestock all summer”.