The people always knew what Dinara was like, and when it was time to go uphill. It was an ordinary way of life, and hard to make any exceptions. During the summer months, Dinara was precious: a home for shepherds, a food source for the animals, and an inspiration for all of those who admired it.

On the map of global biodiversity, mount Dinara holds a special place. As a mountain, it looks no different then the rest of the Dinarides: impressive calcite rocks, broad ranges of grasslands, and signs of historical presence of human life and culture. Its difference lies in the remains of traditional way of life which was shaped by its geographic and climate conditions. Mountain Dinara used to be a home both for the people, and for their treasure – a name locally used to refer to livestock.

It is a sign of great respect to the role of livestock in supporting the life on Dinara. Livestock keeping was the main economic activity its inhabitants. Dinara offered life, especially during the hot summer months, as shepherds took their treasure to the grasslands in the mountains, where they would stay in for the season in shepherd housings, until winter came.

How to use this interactive map?

Because of its rich history, myths and cultural significance, Dinara is not only important for the local population, but also on a broader level. Alongside the local stories and memories, Dinara is also a home to, often unrecognized, a number of animal and plant species – either important, endemic, or protected.

This richness of hidden life was finally recognized as Croatia joined the EU. Dinara was proclaimed as a Natura 2000 site, both as a Special Protection Area (SPA), and Site of Community Importance (SCI). Such protection status is flattering and important, especially because it brought international recognition of its natural values. The protection under Natura 2000 ecological network set a foundation for us to safeguard and protect Dinara’s natural values, for their importance for global biodiversity, and for all the benefits for human life and the wellbeing of its inhabitants.

Anybody who had an opportunity to, even just for once, visit a tiny part of this large landscape, whether the karstic sinkholes, green pastures, forests or caves, and experience and embrace its nature, surely didn’t leave with a feeling of disappointment. Quite the opposite, visitors leave with a desire to experience more of it, and to come back again.

The diversity of the habitat types on the Dinara mountain is the key reason behind its importance. Out of eight habitat types recognized as a priority for conservation, three of them are grassland habitat types. Their conservation status is intrinsically linked with human activities, most notably with the practices of extensive livestock keeping. Accordingly, the main reason behind the degradation of grassland habitats, which are overgrowing, lies in their dependence on grazing. But why are grassland habitat types important to us? Why do we make the efforts to stop the nature’s process of overgrowing  unused grasslands? It is because the grasslands were managed by human activities for a long, long period of time, for hundreds of years. The management of the grasslands, by grazing, or using other techniques, affects a variety of other factors, such as the amount of nutrients in the soil, the ability of the habitat to resist climate change and other.

Grasslands have an important role in the ecosystem, as they are a source of food and shelter for various species. Without grasslands, we would lose many of such species. That is the reason why it is important to protect the grasslands on Dinara. Some of the grassland dependant species remained only in a small number, and their loss would be tragic for local and global biodiversity. The Stone curlew, Short-toed lark, and Ortolan bunting are examples of such species. But the list continues, as there is a variety of other species which depend on the grasslands, such as orchids, butterflies, insects and reptiles.

Most of the grasslands in the Dinara area, historically used as pastures, are left unmanaged and abandoned. Day by day, those grasslands are overgrowing into thick vegetation, causing a loss of grassland habitat and the loss of Dinara’s biological diversity.

Dinara is not only facing the loss of grasslands due to overgrowing. It is also facing negative socio-economic trends, such as depopulation.

During the last thirty years this area suffered a destruction in the war, which was a starting point for other negative socio-economic trends. Depopulation emptied entire villages, as younger generations left for larger cities. Nowadays, the rural mountain area is mostly inhabited by an elderly population. The Dinara mountain and its grasslands, once known for their high-quality traditional products, became lonesome without people, farms and local businesses.

When not used or managed, the grasslands tend to overgrow into thick vegetation, and lose their defining characteristics, which are of important contribution to biodiversity. Overgrowing makes grasslands suitable for a type of dominant species, which cause the degradation of the grasslands, as they transform into another habitat type. Even though all habitats play an important role in global biodiversity, it is important for them to be in balance. Their balanced coexistence is proven to have the best result for species, and for human life in general. 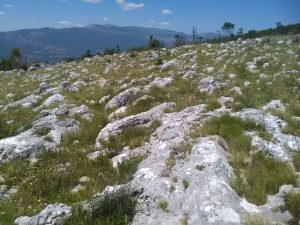 Monitoring the effects of controlled burning – positive for grasslands, plants, and bees

The traditional method of habitat control has come under test. Last winter, six hectares of grassland with scattered bushes and trees on Vrdovo were burned in a prescribed burn. Five months later, we checked the effects. And – they’re promising! 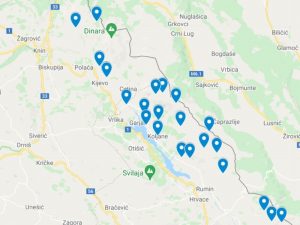 Conclusions of the Collaborative Council meetings – restoration, education and tourism

Wells, ponds, watering places, dry stone walls, goat trails, roads, bee pastures, archeological sites, grasslands, plant habitats – these are just some of the potentials of the area covered by the Dinara back to LIFE project, which were mentioned by the stakeholders. Potential for this and future projects. 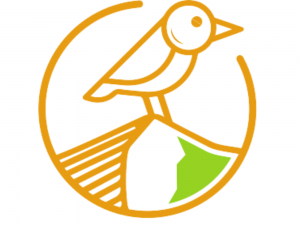 We are launching Dinara back to LIFE newsletter

In order for our supporters to be even better informed about the Dinara back to LIFE project, we are launching a project newsletter. Through it,