Restoration season has finished – 47,6 ha of grassland on Ježević suhopolje has been cleared

Over the course of 7 months participants of the educational-volunteer camp as well as restoration workers have manually removed woody vegetation and improved 47,6 ha of Ježević suhopolje grassland. 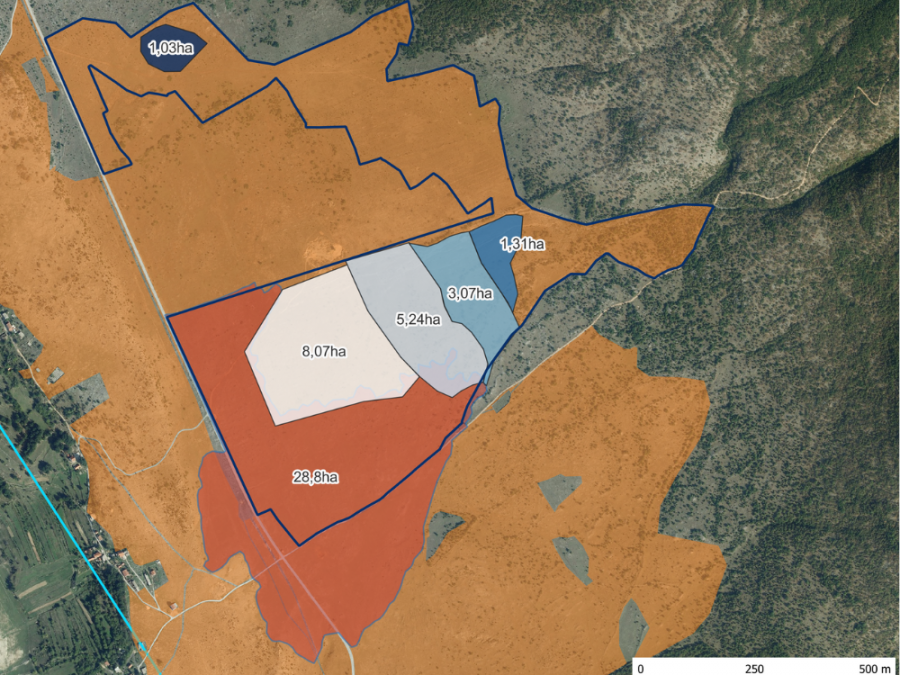 At the end of March our first restoration season finished, which started in September last year, in which 47,6 ha of Ježević suhopolje grassland has been cleared of woody vegetation. By doing this a large grassland area has been made available for the return of Stone-curlew (Burhinus oedicnemus) and Short-toed Lark (Calandrella brachydactyla) to an area which had no record of Stone-curlew last year.

The manual removal of woody vegetation on Ježević suhopolje began in September alongside the educational-volunteer camp Dinara back to LIFE which lasted for two work-intense weeks where 18 students and 20 other volunteers and participants started manually removing woody vegetation and so improved 28,8 ha of grassland. During this first phase methodology was developed considering the tools used as well as a timeline for necessary work. In addition, the 18 students also attended a series of lectures and gained a theoretical understanding of habitat restoration, knowledge they will be able to use in their future activities.

Immediately after the camp finished, the restoration was continued by restoration workers Mario Grčić i Ivan Kekez who started a 6-month season of clearing the Ježević suhopolje from woody vegetation. The removal was carried out on the area next to the area previously cleared during the camp. Despite the work being very physical and monotonous the two workers are satisfied – ‘’I work in nature and heal myself’’, says Grčić. A mechanical technician by profession he was previously working in construction and baking, and now he says ‘’for the first time I go to work singing!’’. Kekez, a driver and firefighter started this work because he loves animals and nature, and he enjoys this type of work – ‘’This is both work and relaxation to me. I enjoy the work and it’s made me feel more youthful!’’. Fieldwork is calm and peaceful and wildlife encounters are rare, a shepherd will come through with his herd now and again. These workers were also a part of other activities during the season, including pond and stone dry wall restoration.

Manual removal of woody vegetation is a crucial part of grassland restoration efforts on Dinara. Large areas have become overgrown over the decades due to mass emigration and a gradual abandonment of cattle breeding in the area. As a grassland gets more overgrown it is less and less grazed accelerating the habitat degradation process. In order to stop and reverse this process woody vegetation has to be manually removed as grazing alone is not enough due to large bushes and small trees which cannot be eaten by grazing animals and therefore they continue to grow and spread unless manually removed.  This removal method guarantees a complete and thorough clearing of all types of woody vegetation, especially juniper (Juniperus oxycedrus) which unlike other vegetation, cannot be significantly managed with livestock and therefore must be manually removed. During the 7 month restoration season we did just that – we cleared a relatively large portion of the grassland, mostly from juniper, for the benefit of wildlife as well as domesticated animals, with a goal of perserving this grassland with the help of local shepherds and their herds, and eventually expanding the cleared area in continuing these restoration practices. The presence of grazing cattle will help keep the grassland in a good condition and prevent any future overgrowth by woody vegetation.

Parallel to the woody vegetation removal a ‘project flock was formed, made up from cattle from 6 local herds which already graze on target areas in Kijevo suhopolje and Ježević suhopolje. Grazing on the cleared area will prevent future overgrowth by juniper and other such vegetation, which will in the long run preserve and improve the grassland habitat for the above-mentioned bird species, which are themselves the aim of this project. Both the Stone-curlew and the Short-toed Lark are dependent on open areas with scattered low vegetation without any obstacles in the area. Usually residing in semi-desert areas which are sparse in Croatia, but are found in Kijevo suhopolje and Ježević suhopolje, and a few other locations. By improving the habitat conditions for these species, we are directly improving the habitat for numerous other species dependant on open areas and therefore also contributing to their conservation as well.

There will be no restoration work at the foothills of Dinara until the end of August as nesting season is underway and the birds require peace, this year we are especially hopeful we will see nesting Stone-curlews as they have not been seen in the area since 2020.

In order to increase overall grassland area, we are staring a new restoration season in September, increasing our ‘project herd’ and intensifying the grazing regime, we’re also hoping we will be permitted to use a third restoration method – controlled burning.