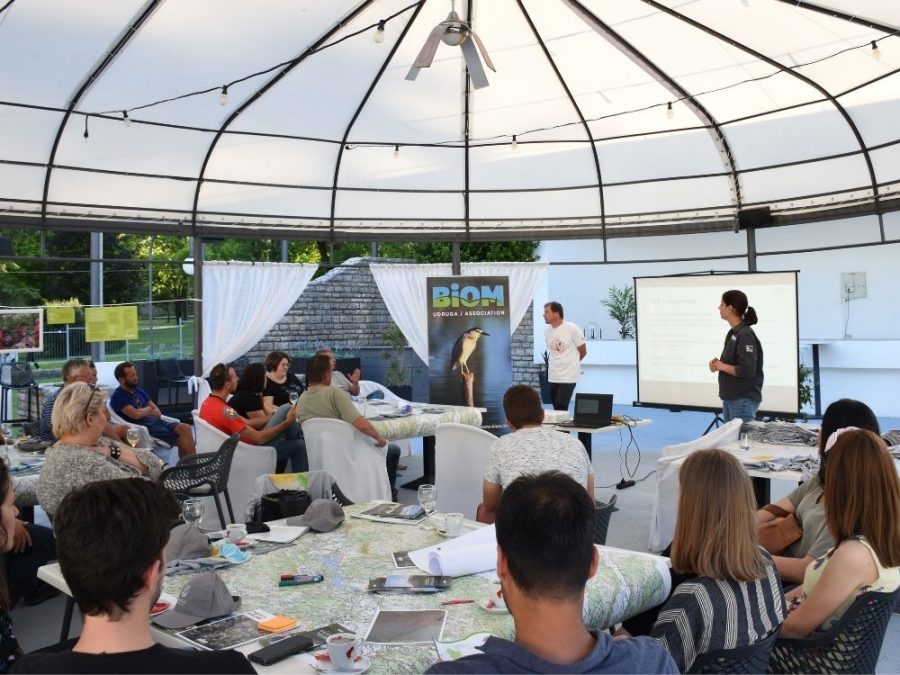 The first meetings of the Cooperation Council were held in Vrlika and Sinj last week, at which representatives of cattle breeders, hunters, beekeepers, tourist workers, representatives of local self-government and mountaineering associations received basic information about the Dinara back to LIFE project and enriched it with ideas. As part of the meetings, a thematic exhibition ‘Return to nature – Dinara back to LIFE’ was held, which featured 15 photographs and thoughts of the population living near the area about what Dinara means to them.

30,000 euros for livestock and equipment are waiting for cattle breeders

The coordinator of the implementation of the Dinara back to LIFE project, Zdravko Budimir, presented the project from its beginnings in 2017, when the writing of the project text, the elements of the project and its goals began. Expert associate for nature protection Ivana Selanec focused on project activities that could benefit stakeholders, such as habitat restoration, dry stone walls and lawns.

By working in small groups at the Council, the guests presented their proposals, and a large group of cattle breeders, mostly from the Vrlika area, expressed interest in cleaning dry stone walls and renovating watering places and wells, as envisaged by the Dinara back to LIFE project. Cattle breeders stressed that today it is difficult to go high on the mountain because there is a lack of roads, so cattle breeders will choose the paths that they believe should be restored, and project partners will participate in the organization of restoration actions. The project envisages a cost of 30,000 euros to support and encourage the purchase of livestock and other equipment to be carried out in the coming months, and cattle breeders are particularly interested in the purchase of donkeys, but it is stated that it is difficult to procure one young monkey, let alone more.

An educational habitat trail is looking for its place

As part of the Dinara back to LIFE project, an educational trail for observing habitats, plants and birds will be established in the project area, which was discussed at the workshop on tourism at the meeting of the Cooperation Council, where the inclusion of “wildwatching” and “birdwatching” was discussed. BIOM will offer education to tourist guides related to the identification of birds, different habitat types, recognition of plant species, grassland habitats and the like. As the biggest obstacle, the representatives of the Tourist Boards of Knin and Vrlika stated the lack of capacity of tourist and mountaineering guides in the area of ​​Dinara. This educational trail will be equipped with QR codes through which hikers and mountaineers will receive additional information about grasslands that are protected by this project, about interesting plants that inhabit the area and about the birds that nest there – garden bunting, cuckoo and short-toed woodpecker. The restoration of their habitats is also the intended goal of the project. The trail will also be digitized and as such will be available online.

One of the workshop participants mentioned the abandoned village of Čubrice east of Ježević, where the remains of houses are still visible. The representative of HPD Zolj from Kiev also mentioned the location of the Illyrian hillfort on Kosorska Glavica above the Dubin spring. The problem of a bad road towards Bračev Dolac was also mentioned, which as a location is important for beekeepers and mountaineers, and could become an interesting tourist location. These unused tourist facilities have the potential to expand the tourist offer and interesting content for the tourist community to develop.

How does climate impact Dinara?

The meeting was also attended by a young German filmmaker Manuel Inicker who is shooting a documentary on the impact of climate change on nature in general, which he will present with a film that he will begin shooting on the Dinara from which he will descend to the source of the Krka and all the way to the seaside, documenting changes that occur due to climate disturbances.

At the training workshop, experienced beekeepers offered their help and knowledge to potential colleagues in developing their business. The need for a tourist tour that would include the locations of beekeepers and livestock, and an example of a good burst from Slovenia was mentioned where a specific segment of health tourism – inhalation rooms where the treatment of beeswax smoke is used to treat respiratory diseases. It was also suggested that hobby beekeepers should be encouraged to associate to avoid the problem of disease and uncontrolled bee grazing.

At the Collaborative Council at the Alkar Hotel in Sinj, about 30 participants began the conversation about the sensitive issue of fire and controlled ignition. Expert advisor for nature Ivan Budinski explained that winter controlled burning actually promotes biodiversity, and the forest is not endangered because it is humid and does not burn at this time of year, while summer fires are mostly unnatural, ie most often caused by human hands and leave immeasurably greater damage. It is exactly winter ignition that prevents the spreading of summer fires.

The representative of LU Hrvaca suggested the use of water from Peruča to extinguish wildfire and to break through the fire roads on the Dinara, which is a proposal that the local community should consider. When asked about pine afforestation, the representative of Hrvatske šume explained that it is afforested with this species because it is autochthonous, but added that the intensity of afforestation will be greatly reduced. The problem of the mined area northwest of Vučipolje was also mentioned.

Hunters and mountaineers are already working, Biom will help

At the workshop on restoration, mountaineers and hunters stated the need to restore the dry stone walls, which was envisaged by the project, emphasizing that the dry stone walls are being restored. Hikers and hunters described their trail maintenance activities so far, garbage cleaning, including pit cleaning, and well cleaning. Biom offered its help in these activities with manpower and tools, and an appeal was made that activists consult with Biom experts on the timing of cleaning the pits so as not to disturb the birds while they are nesting there. The problem of pollution of puddles with carcasses is mentioned, which will be solved by setting photo-traps, in which the project partners will also help.

At the workshop on trainings, the incentive for the establishment of family farms was presented, about which trainings for those interested can be organized as part of the project. Since this area has recently been declared a nature park, increased arrivals of hikers and mountaineers are expected, and since family farm owners do not have information on the number of tourists coming, they will be informed about the numbers of people visiting the area and the interest of visitors will be determined. .

We will have trails – guides are required

The workshop on tourism was focused on the grassland watching trail and its potentials, as well as possible locations, and on education related to this new tourist content. Namely, as part of the Dinara back to LIFE project, educational workshops on grasslands, plants and birds will be organized for tourist and mountaineering guides, and the tourist community will communicate with those interested in participating in this training in the coming months. Possible locations for this trail are listed. One possibility is the trail across Vrdove plain from its eastern to western edge, which is a habitat for project species and this area is easily accessible by vehicles, and, given that it is a plateau, the trail would be minimally demanding in terms of fitness. Another possibility is the existing hiking trail from Vučipolje to the mountain house of St. Jakov, and another one is the area between the Gornja Korita and Donja Korita areas on Kamešnica. As part of the project, one trail will be formed, and this experience will lay the foundations for tourist boards to set up similar trails in other locations.

The meeting of the Council in the beautiful ambience of Hotel Alkar ended with a review of the exhibition ‘Return of Nature’ and informal socializing of those present who expressed satisfaction with the audience and support plans, in which they will participate, to which all others are invited.