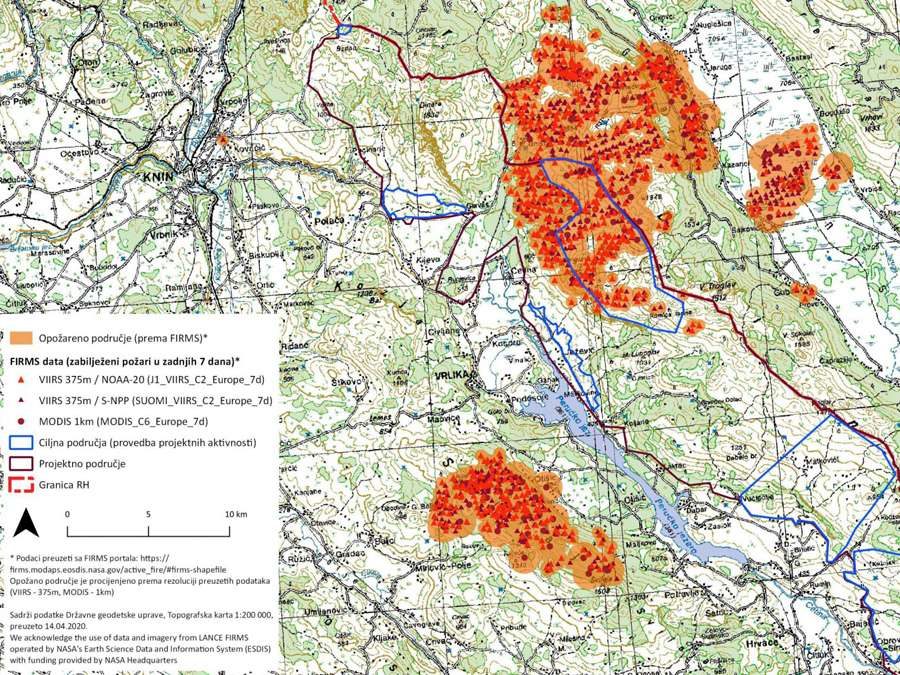 The fires on the Dinara Mountain did not cause catastrophic damage to the entire burned area, because most of the grasslands will be restored after the first rains, but not the habitats which will take decades. Those habitats show that the tradition of uncontrolled burning has no place in modern area management. Management of the Dinara area, which is part of the Natura2000 network of protected areas, is an obligation of the Republic of Croatia and uncontrolled fires will make this management difficult long term.

Photo: Fire on Dinare (from Glavaš)

Last days, numerous media have published articles about the recently extinguished fire on Dinara Mountain. The fires are mostly associated with negative impacts on nature and people, but some of the comments show that there are other opinions. Since the part of our Dinara back to LIFE project is planed controlled burning, it is important to point out what is the difference between controlled burning and fire.

With controlled burning, relatively small areas are burned in a targeted manner depending on their use and the goal we want to achieve, while with fires, large areas are also uncontrol burned for which fire is harmful for several reasons.

The impact of fire on different habitats is significantly different and depends on the current weather conditions and the amount humidity of the fuel mass. The impact of fire on grasslands is minimal, especially in winter; but after a couple of spring rains the traces of the fire will hardly be seen. In fact, fire will destroy much of the species that overgrow grasslands which is useful in the long term management. The largest burned areas on the Dinara are grasslands but it’s important to know that it wasn’t just the grasslands that burned. A curve mountain pine stands, although seemingly only low dense shrubbery, take decades to recover in the harshness of the mountain climate. Beech forests, which are spreading slowly in the karst, and there are very few left on Dinara, take much more than one human life to recover.

Larger areas of sub-Mediterranean shrubs and low forests were also burned in this fire. Burning is often focused on this type of habitat with aim to restore the grassland, for example for the pasture. It is an old tradition that has remained as a way to “improve” the area even now, when most of the burned areas will not be used for grazing at all because there are not as many cattle as there used to be. Medunaca oak forests, which eventually emerge from these thickets, are almost non-existent in larger areas, as they have disappeared through out thousands of years of livestock, logging and burning. It is only in recent decades that these forests have begun to regenerate and it is our job to help them do so. Of course, we will not turn all grasslands into forests, but we will not prevent the overgrowth of grasslands everywhere. Dinara is the part of the EU Natura2000 network of protected areas and it is clearly defined which species and habitats are important; and in order to preserve them we need various types of grasslands, forests and transitional habitats.

Controlled burning, as a part of area management, is required to respect all area users, all habitats and species living there. Grasslands are burned for maintenance purposes, but great care is taken not to spread the fire to forest habitats, with the exception of one part of the thickets that we want to return to the grasslands. The controlled burning is carried out in accordance with the spatial planning of the area management, and in that spatial planning we take care of both nature and the people who use that space.

Dinara has space for all: for pastures of thousands of cattle herds, for all species that live in the grasslands and for restored forests of oak, beech or pine, and many species that live there. It is only important to treat it with expertise, knowledge, experience and great respect for nature resource.